The US Dollar Has Bottomed 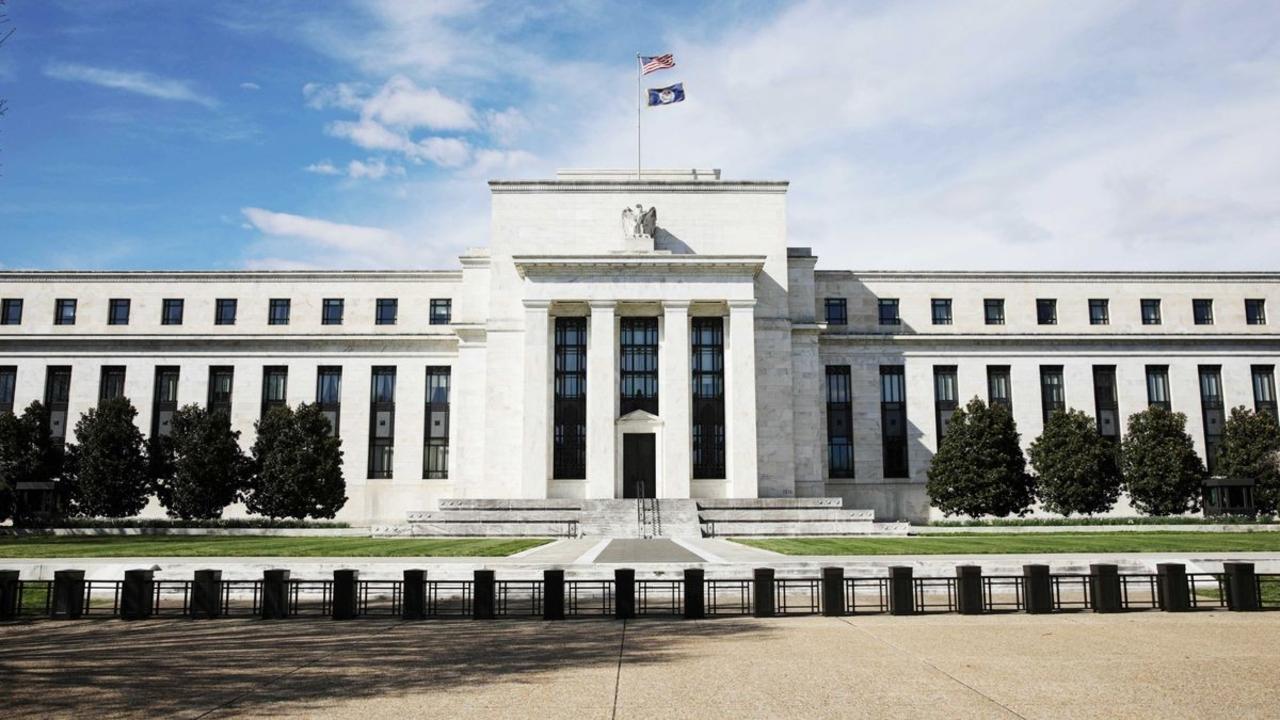 Did you know we can research specific stocks for you? Give us a try!

To understand our point of view, it's important you read our previous post on this topic which we'll be referencing throughout this article. It was the basis of our prediction for EURUSD to rally from 1.08 to 1.20 back in May (ie, extreme USD weakness). Now, it's time to go the other way.

We established that over the last ~12 years, the USD has strengthened significantly despite interest rates steadily declining for the entire period. You might remember this chart overlaying the US Dollar Index with US 10 Year Yields since 2008: 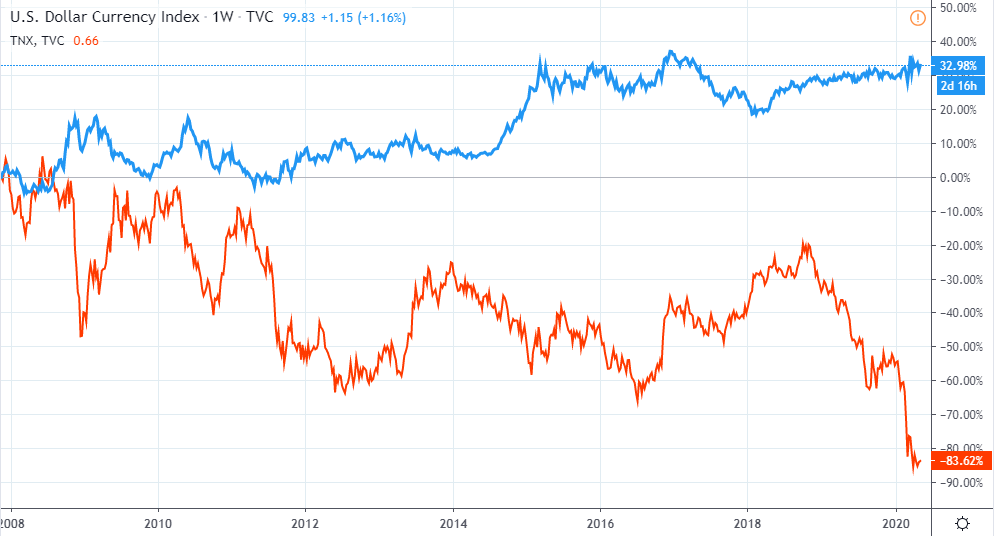 What you're looking at is a +33% appreciation in the dollar despite interest rates falling about 84% over the same period. This is a longer term view, but in this update we're going to zoom in and look at the events following May 2020.

When the Fed announced a renewed stimulus program in March to deal with COVID, the dollar experienced a strong spike - until it became obvious the additional measures were not going to continue (highlighted in our previous post). The Fed's balance sheet topped out around May (ie, policy tightened), and that's when we saw a significant decline in the USD.

Between May and now, the balance sheet has remained in a subdued range between US$6.8 trillion and US$7.2 trillion with no additional expansion expected.

This ''tightened'' stance was in place until August 27th when Chairman Jerome Powell revealed a new approach to the Fed's inflation policy. Basically, 2% inflation is no longer a fixed target but rather the Fed will seek to maintain an ''average'' of 2% over time, meaning it could run much hotter in the short run without triggering a monetary policy response.

The USDX appears to have paused its decline on this news, and we believe it's time to look for a bottom and start taking it up.

Despite heavy stimulus from the Fed, interest rates haven't moved much since the March 15th announcement: 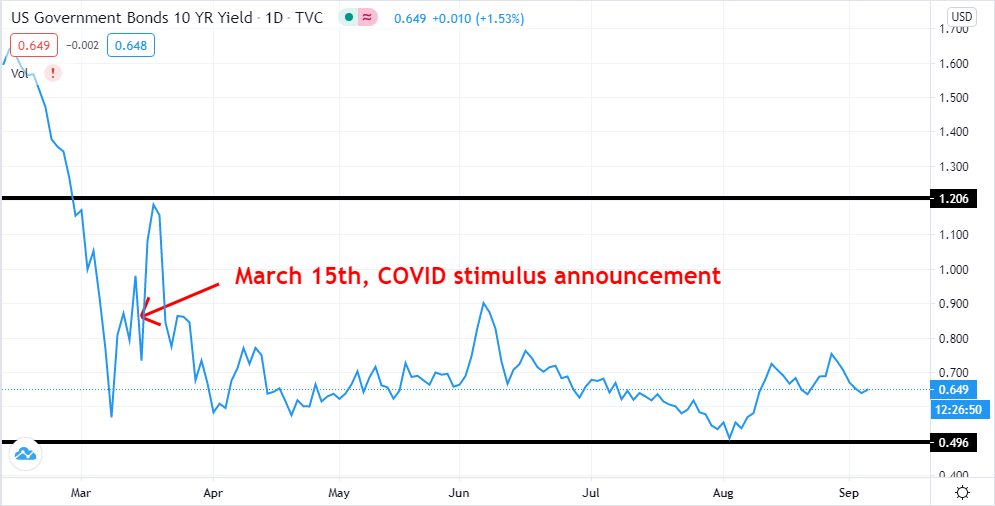 For context, let's have another look at the trend over the last ~3 years: 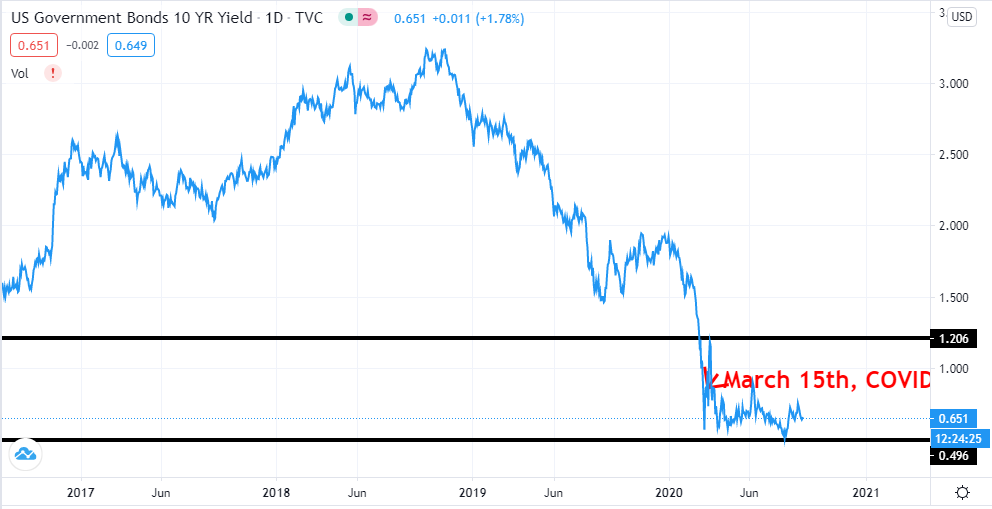 There's an argument to be made that interest rates preempted the policy response falling from almost 2% near the end of 2019 - but the dollar was actually rising through that period. Yes, it recently collapsed but that didn't occur until the policy measures were essentially over with.

We made this prediction based on our USD analysis and the correlation we've laid out. The pair was trading at 1.08 at the time and we applied a target of 1.20 based on a series of technical factors, combined with the idea that the Fed would likely need to step in again with new measures (which they now have). Without new Fed action we'd be looking at a revised target now of 1.25, but instead we're going the other way and calling for USD strength, and a top in EURUSD.

We're calling a bottom in the US Dollar Index here, and therefore a top in EURUSD as per the above chart. We believe the Fed's new approach to inflation will result in a persistently low fed funds rate, with no change in outlook or tone for at least the next 12 months.

Want to invest with us? Join now!