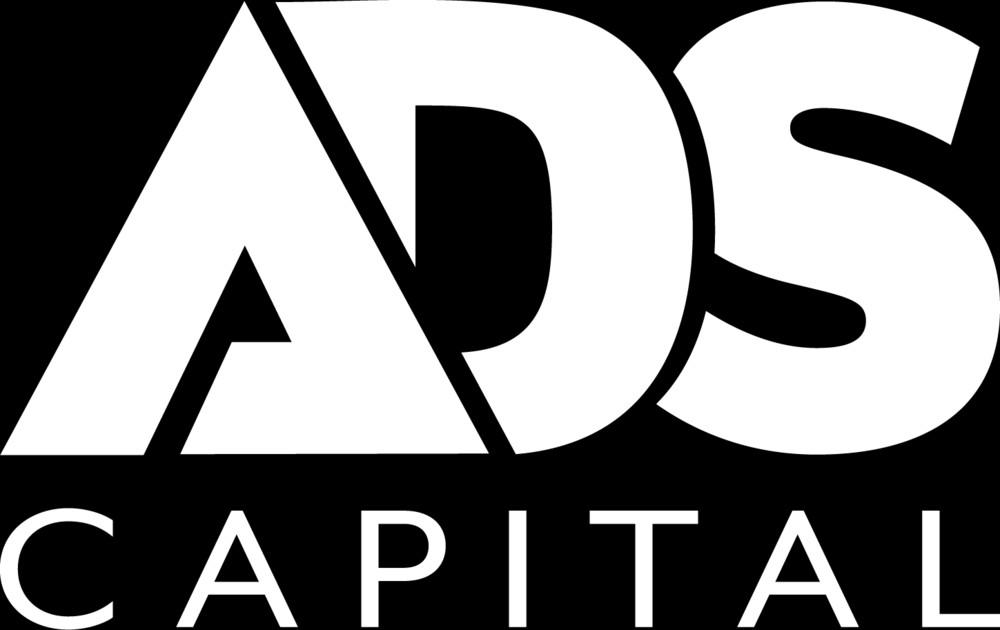 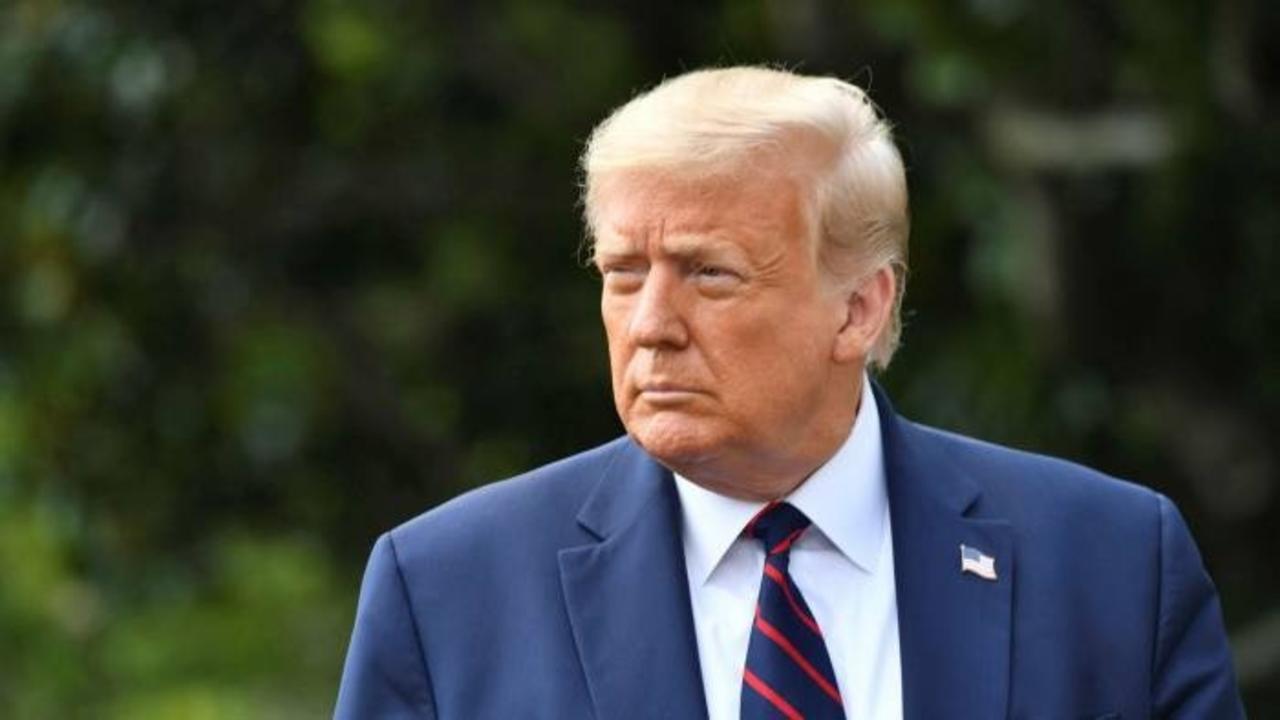 We write about interesting stuff impacting the markets.

Want to invest with us and get access to all of our stock research? Join SelfWealth!

Having worked in the financial markets for over a decade now, I was very active in the lead up to, during and after the 2016 election. I watched equity futures crash in fear of Trump's shocking, impending victory only to rocket to new highs once the money realised what his administration meant for tax policy and business regulations.

Few people saw a Trump presidency in 2016, and few people feel that America could re-elect him (morally) in 2020. You could say they see it as unconscionable. The reality is though, despite all of the headwinds he's facing, he has still managed to generate more enthusiasm than Biden and is likely to win this race.

To visually depict Trump's present momentum, I'll use the below chart which is one of my favorites 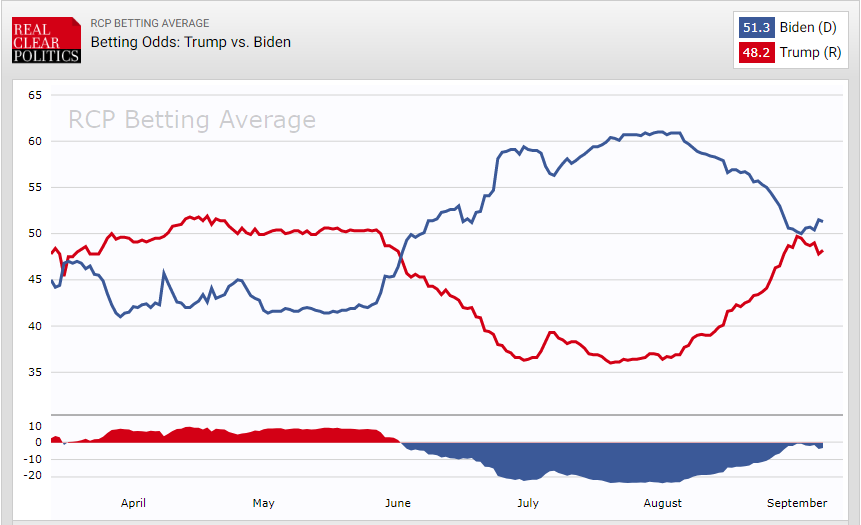 The COVID-19 pandemic decimated Trump's odds as he endured a media firestorm in response to his administrations handling of the virus. Since then, he has staged an impressive comeback to within half a point of his opponent. In my opinion, people are more forward looking than they're given credit for and they understand that this crisis is unlikely to extend beyond H1 2021, when a vaccine is expected to have rolled out.

Did you know international stocks are coming to SelfWealth? They're one of ADS Capital's partner brokers. Click on the image to join now, and get access to all of our stock research! *Australian clients only. Non-Australian clients can join us through CMC Markets

More important than the above is the fact that the Democrats can't expect to win this election on the ''I Hate Trump'' vote alone. Unfortunately for them, the prominent figures within the party seem to spend most of their time talking about Trump, and when they're not, they're talking about raising taxes and pie-in-the-sky government programs - none of which are helpful in getting people to the polls.

As of now some bookmakers (and by extension, punters) have the race as ''too close to call'' with dead even odds, meaning Trump has successfully closed the gap. In addition, the Trump campaign have carried their 2016 social media masterclass through to 2020, absolutely dominating the engagement game across platforms.

The Key To Success: Engagement

I want to give credit to Kevin Roose at the New York Times for inspiring this particular section with his August 27th piece about Facebook (I've added a link to it at the end of this article). He also runs Twitter account @FacebooksTop10 which pulls data from Facebook-owned CrowdTangle and shares the top 10 link posts each day.

If you're someone who gets their news from cable TV or a traditional news outlet, you're probably less inclined to think Trump has a chance at winning the coming election because you're simply not in tune with what's really happening on the ''ground''.

You can slice it any way you like, put it down to the idea that we ''have to pay attention'' to him because he's the President, or that ''people who hate him interact with his posts too'', but the fact is Trump and those aligned with him are absolutely crushing the social media engagement game. Most days, they own the majority of the top 10 link posts on Facebook. Think about that. The biggest social media platform with 2+ billion active users is being dominated by Trump-positive media.

The top-performing link posts by U.S. Facebook pages in the last 24 hours are from:

The above is the top 10 from September 6. I count seven (7) Trump-supporting people or organisations and just one active anti-Trump voice, Robert Reich, at the bottom of the list. I'll put a link to the FacebooksTop10 Twitter account at the end of the article and I encourage you to go and explore it for yourself.

If that's not a big enough sign, do know who the biggest publisher of news (by engagement) on Facebook is? The Daily Wire, which is run by one of the loudest voices in the conservative movement, Ben Shapiro. Since we've spoken about momentum, how's this. The Daily Wire was:

7th place in May

1st as of July, with 99 million engagements

This seems like a really good time to leap frog CNN, Fox News, The New York Times etc. You get the idea. The election is now 2 months away and Facebook users are interacting most with Trump-positive news and news organisations.

Facebook have tried to explain that engagement isn't indicative of popularity because often people are even more likely to engage with something that upsets or offends them. To be honest, I think that train of thought is a huge mistake if you're a Democrat trying to interpret this data. 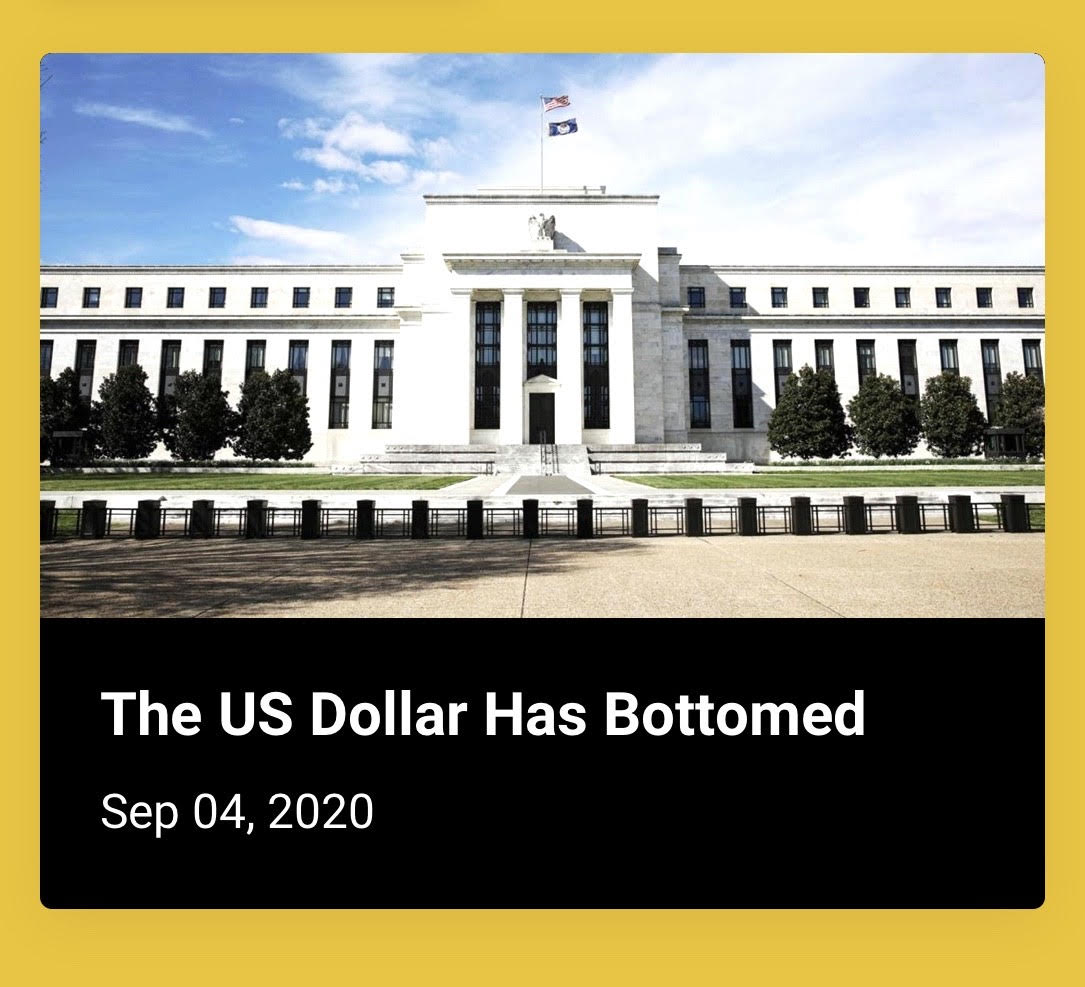 We all know how social media works. Stuff we like, comment on or share often makes its way onto our newsfeed for all of our friends to see, so unless you're someone who has a network comprised of people who only hate Trump, you're likely spreading news that the moderate Republicans or conservatives on your feed would be supportive of. The point is, every bit of engagement by someone who isn't supportive of Trump could actually be breeding enthusiasm among even more potential Trump voters. Even if you brush that off, how can you ignore the effects of having Trump's (political) brand in that many people's faces each and every day?

I want to swing back around and visit this momentum Trump appears to be building. I shared the RealClearPolitics chart but this can be broken down even further.

If you've looked at any official polls recently, you probably feel like this entire article is off base. How can Trump be gathering support without ANY of it showing up in the polls? I refer you to 2016. The game has changed. Kevin Roose, who I mentioned earlier, said something really intriguing which just about sums up this phenomenon ''A true reflection of someone's preferences is what they read, watch and click on when nobody's looking''. If you've made it this deep into the article, what I'm referring to here is the information in the previous section.

In 2016, it appeared that people were scared to vocalise their support for Trump because of the way he and his base were portrayed in the media. Give that one some thought, and consider how much worse this has become over the last 4 years.

Since polls won't give us an accurate reflection of the general public, it can be useful to see how people are voting with their money. On July 31st Trump's odds traded at about $2.45 which represents the high for 2020, implying he had a 40.8% chance of winning. He is now into $1.95 on Bovada, America's largest online bookie which implies he has a 51% chance of defeating Biden. Biden does edge him out though, only slightly, at $1.90 (53%).

Australia's largest bookmaker, TAB, has the odds locked even at $1.90. They can't split the candidates.

The question to ask yourself is, why hasn't this shown up in the polls? It's very curious.

Despite the official polls being in favor of Biden, The Hill notes that Trump is favored to beat Biden in the upcoming Presidential debates. The USA Today poll cited indicates 47% for Trump compared to only 41% for Biden.

In an article published today by Oddschecker, they've stated that a whopping 84% of the money wagered in online bookmakers is flowing on Trump to win the first debate (month to date).

My hope is that this helps people realise Trump's 2020 victory isn't as shocking as they're being led to feel. 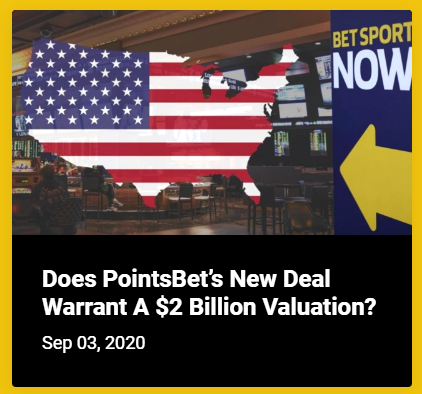 What If Facebook Is The Real 'Silent Majority?' - Kevin Roose, NYT